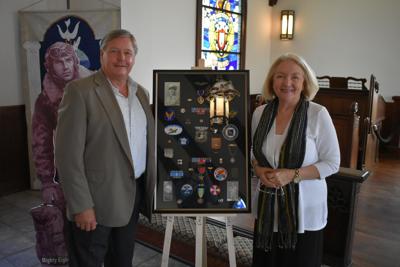 The Mighty Eighth Airforce Museum hosted author Carol Avriett in an author talk at the Chapel of the Fallen Eagles Thursday morning.  This talk is part of a continuous author’s talk series held monthly at the museum.

Avriett, former home’s editor for Southern Living Magazine, has a rich family legacy of military veterans in her own family and majored in history with a specialization in military history when in college.

When asked why she chose to record veterans’ stories for her book topic, Avriett said she wanted her to tell their stories.

“I want all my grandchildren to know what our veterans have done for us and for this great country. If we don’t get them [the stories] down now, they won’t be taught in school or recorded,” she said.

She explained to the audience that her husband attended a conference where the speaker was a WWII veteran named Dr. George Starks. Avriett met with Starks to hear his story and was inspired to write her book, "The Coffin Corner Boys: One Bomber, Ten Men, and their Incredible Escape from Nazi-Occupied France."

Paul Starks, George Starks' eldest son, gave a photo presentation to reflect on his father’s legacy. Starks explained that many of the pictures were taken on a recent father-son trip taken to retrace his father’s daring escape through Europe after his plane was shot down in France.

George Starks joined the U.S. Airforce at 18, received his wings a year later at 19, and had his plane shot down over France at 20. For the rest of the war, he came face to face with Nazis on five different occasions, sleeping in haystacks and finding refuge in farmhouses throughout the French countryside.

Starks finally escaped across Lake Geneva with the help of Maurice, a Frenchman who was part of the Resistance, and entered Switzerland. Starks grew restless in Switzerland and left to meet up with the French resistance, only to end up with Gen. George S. Patton of the 7th Army's unit traveling to Italy and later Casablanca.

Starks spent the rest of the war speaking about his experiences as well as educating others on survival. He served again in the Korean War as a dental officer and eventually Chief of dental surgery.

After Paul Starks recounted some of his father’s near-death experiences while fighting in the war, he said that his father lived by the saying, “I’m gonna go on one more day.”

George W. Starks passed away on July 29, 2018, and his legacy lives on within the pages of Avriett’s book.

The Coffin Corner Boys can be found online through Amazon and for sale at the Mighty Eighth Airforce Museum bookstore.