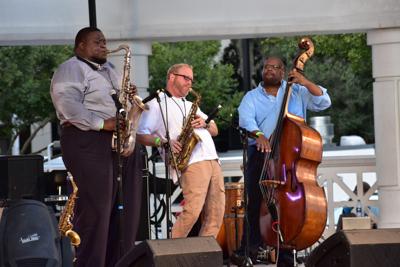 The Fort Benning Band or the 283d Army Band is currently under the direction of Captain Aaron Morris. Morris has had a long career in musical performance while in college as well as in the military and now leads the Army Band in performances alongside First Sergeant Hubert Holmes. The band has been in existence for 50 years.

Kim Gusby of WSAV Savannah introduced Jane Bunnet & Maqueque who brought the Caribbean rhythms of Cuba to the stage; the name “Maqueque” meaning “fiery spirit of Africa.” The group performed their Grammy nominated song “Oddara” as well as a new composition written by Danae Olano, Maqueque’s pianist. Group leader, soprano saxophonist and flutist Jane Bunnet formed the group by mentoring young female Cuban musicians. The group has also been featured on NPR’s Jazz Night in America and were recently voted as one of the top ten jazz groups by Downbeat magazine.

The Coastal Jazz Association added George Dorner to the CJA Hall of Fame at the concert. During his long performance career, Dorner performed alongside Tommy Dorsey and his band and played at former President Jimmy Carter’s inauguration. Dorner passed away this year at 94 year old.

The CJA All-Star Band performed several standard jazz pieces as well as accompanied local jazz celebrity Huxsie Scott. Scott performed “What a Wonderful World.” The group performed several of Ben Riley’s pieces in his honor since his passing in November 2017. Riley was known as jazz great Thelonius Monk’s drummer and having performed alongside Sonny Rollins.

Natalie Hendrix of WSAV Savannah introduced final world-renowned performer Chuck Leavell. Leavell has been performing for over 40 years alongside the likes of The Allman Brothers Band, Eric Clapton, John Mayer and many other rockin’-rollers. Leavell currently is the musical director and keyboardist for the Rolling Stones. He debuted his latest album entitled “Chuck Gets Big” on-stage.

“During this festival, there’s nothing but great times, great music, and great love. The only thing that does that this event is the St. Patrick’s Day parade!” said Skip Jennings, former board president of the Coastal Jazz Association.