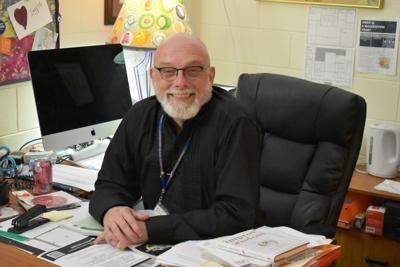 Professor Darryl Thompson is anything but your average, run-of-the-mill theatre instructor. It’s no surprise he’s a favorite professor here on campus. From his animated antics in improv to his sharp-witted quips during speech class, it’s no surprise many students on campus admire him not only as an educator, but as an individual.

What makes a man like Thompson so unforgettable? He’s crafted for himself a mold of his own.

Since kindergarten, Thompson has known he was destined for theatre.

“I remember in kindergarten we were doing our little end of the year performance—a little singing, a little dancing. My mother made 4 red vests, one for me and three other boys, and we performed ‘She’ll Be Coming ‘Round the Mountain’ and we got pushed out on this stage, just little five year old kids, and none of us could remember the words to the song. I looked over offstage to see one of the teachers, and she started the song for me. I ran out and eventually they caught up with me, but the audience went haywire like it was the funniest thing they’ve ever heard. I got thinking, ‘Gee, I like this!’,” said Thompson.

He caught the performance bug young, but by his own admission, it was years before he came back to the stage. It wasn’t until junior college that Darryl re-caught the bug. His father was a local printer who assisted the college in printing their performance brochures.

“I remember the director coming in to pick up a batch of programs one time, and I had found out that he was the director. I was working in the shop at the time helping my dad, so when the director came in I started singing, so he could hear me. I was hoping he’d walk over and say ‘God! You’re the best singer ever! You’re a star!’ Well, he didn’t but it did give me the guts to go audition for a show,” said Thompson.

Thompson said he didn’t get his first lead until seven or eight years later and says he firmly believes there is no such thing as a small character. He recalled his past role as a delivery man in Simon’s Barefoot in Park, wherein he learned the importance of nonverbal comedic timing.

“It’s not about how big the role is, it’s about how well you do with what you’re given,” said Thompson. “I’ll take small roles just as quickly as I’ll take a big one. It’s what you do with it.”

Thompson dropped out of high school when he was fifteen, in eleventh grade. He said that he believes he wouldn’t have left had his high school had a theatre department. His parents weren’t originally supportive with Thompson’s ideals of a theatre career, citing that they were concerned about his future livelihood and success.

It wasn’t until he back to college that he realized both his profession and hobby could be the same thing. Thompson said he always knew he wanted to be a teacher at some time, but when he realized both teaching, theatre, and his passion could come together, he knew this was the right path for him.

“Know what you want to do and know what you’re good at, and accept it,” said Thompson.

The first show Thompson saw was a year before he decided to audition at Pensacola Junior College was Music Man. He believes that was his final turning point in deciding to come back to theatre.

“Musicals are my thing! You name any of the golden age of Broadway shows, and I’ve probably done them all,” Thompson said. “Sweeney Todd is probably my favorite.”

His experiences at the University of West Florida he claims encouraged him to push himself farther and something he now keeps in mind with his students. He also did some background acting under the direction of Jonathan Demme of Silence of the Lambs fame which he said left a lasting impact on him.

Like most actors, Thompson has a definitive opinion on Shakespeare. He says he leans more toward the purist perspective of performing Shakespeare as it was done originally.

“When I was the lead in Titus Andronicus, because it’s such a bloody show we put it in a kind of chophouse idea. At the end, I came out wearing a red cook’s apron with all my tattoos hanging out—a kind of Texas Chainsaw Massacre kind of vibe,” said Thompson.

Thompson recalled the show he was most proud of was his direction of the Shakespeare play The Tempest when he was working at Prairieview A&M. The cast won the regional competition because of their stellar performance for the judges.

He left Prairieview A&M shortly after his parents passed away, choosing to move back to his hometown so he could start a community theatre group there.

“We need to give these young adults something to do instead of starting their own meth lab or something,” said Thompson. His first show that winter A Christmas Carol brought in around fifty individuals for the cast and the audience was very supportive.

“I remember when my mom and dad’s friends bought a ticket, and she came up to me after the show and said, ‘Your mama and daddy would be so proud of you’, and it was one of those moments, you know?” said Thompson.

“I really didn’t want this job at the beginning, and I thought I screwed up my interview. This has been where I’m supposed be, you know? You have that epiphany at some point, and I had it a couple years after I’d been here. I thought, this is it. This is where I’m meant to be,” he said.

Thompson recalls that his friends and the emotional support of a partner are what has carried him through his darkest times.

Thompson believes that the community of theatre offers a safe space for those in the LGBT community as well, stating that many who identify as such are perfectly suited for the venue.

“I’m not sure that it really has anything to do with orientation as much as it does community. We find our like beings there, and it’s people like us,” he said.

As an individual who came out as a queer man in the 1980s, Thompson recalled the rampant homophobia he experienced when he came out in college. He said he was called every “f-word” one could imagine, and although he was never beaten for his sexuality, he said he was made to feel like trash.

“You get to a point where you’re trying to please everybody else or trying to fit into their mold of what you should be but at that point, that’s what brings on the depression. To stay in that mold is not a healthy thing,” said Thompson.

He said he tells his students that he knows his flamboyant, out there, loud, boisterous, and that he has a huge personality, but that if he tried to fit into the mold of what others expected him to be, he wouldn’t be here today.

“Be who you are,” he said. “Once you realize who you are, and you can be that person, that’s when no one can stop you from succeeding.”