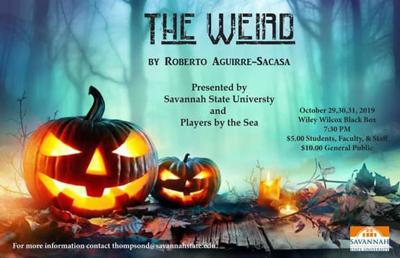 Professor Darryl Thompson and a cast of talented SSU students are preparing to open their fall production of "The Weird" by Roberto Aguirre-Sacasa.

“It is a collection of short, pulpy kind-of plays. There’s ‘Bloody Mary’, it has to deal with two teenagers who say ‘Bloody Mary’ in the mirror, then there’s one that’s called ‘Insect Love’ that’s based off the movie—the 1958 version of ‘The Fly’, there is ‘The Ten Minute Play about Rosemary’s Baby’ which there is a play—and I believe it’s called ‘The Baby’—and they mixed it with ‘Rosemary’s Baby’ to come up with this idea, then there’s ‘Swamp Gothic’ which is set down in southern Louisiana, ‘Morning Becomes Olestra’—I don’t know if you remember but back in the nineties there were these Olestra chips that gave everyone the runs, and then the last one is ‘Dinner With Super Friends’ with Supergirl and Magneta. But yeah, they’re just fun little, pulpy, kind of corny—some of them are really corny—and it’s just a short evening, probably only ninety minutes.”

2)    How long has the play been around? It feels to me as though it has a seventies kind-of vibe.

“That’s what I thought too but it was written in 2008. But each piece is in a different time zone. Like ‘The Fly’ is set in 1958, ‘Olestra’ is in the 1980s or the 1990s or whatever, so those are the only ones that have to be done in those time periods. You really don’t know, you know? You don’t really have to know the time period for those plays. But I had seen the show years ago and thought, ‘I’m going to save that and do that one day over at the school!’ and I just decided ‘Let’s do it for Halloween this year!’”

3) So you’re the director, and you’ve obviously done a lot of acting as revealed in earlier profile pieces. So how long have you been directing? Is it something that just kind of happened at some point?

“You know, my first directing job was at my high school—after I had gotten out of high school—God, I’m gonna say like in maybe the ‘80s. Somebody was doing a show at the high school--I think it was the English teacher at the high school who was directing it—and she wasn’t really sure what she was doing so they asked me if I wanted to be part of it so I said ‘Yeah, sure!’ We did, I think it was, ‘Snow White and the Seven Dwarves’, which of course at that point really was ‘Snow White and the Seven Teenagers’.”

4) Do you have a favorite little segment of “The Weird” that you just get tickled over every time in the sequence?

“I’ll have to say the feel good one is the last one—that’s ‘Super Friends’. I love ‘Swamp Gothic’ because it’s kind of gothic-y; I think ‘Olestra’ is gonna be the one everyone is going to remember when they leave for many reasons, more than what they think they’re going to.”

5) Just for kicks, do you have a favorite Halloween movie or pulp favorite?

“Of course, ‘The Rocky Horror Picture Show’. You know, I’ve seen that movie over 200 times. Cause that was one of the things, you go see it every weekend. That’s probably the big one, and of course, “Charlie Brown and the Great Pumpkin’.”

"The Weird" opens Tuesday, Oct. 29 and will continue showing until Halloween night at 7:30 p.m. at the Black Box Theatre in Wilcox Wiley. Tickets will be available at the door, $5 for students, faculty, and staff. General public tickets will be $10.