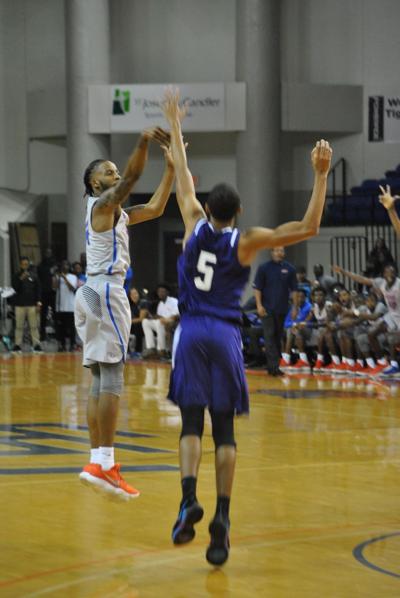 Alante McCray Fenner, born November 17, 1993 from Lake Wales, Fla., Is a senior basketball player who is majoring in Interdisciplinary Studies.

Fenner is a red shirt senior who last played in the 2015-16 season for the Savannah State Tigers. In his last season playing, Fenner averaged 15 points, 5 rebounds, 4 assists and 2 steals per game.

Q: What is your mentality for the upcoming season?

A: The mentality that I️ have for this upcoming season is to bring leadership being that I️ have the most experience as far as playing at this high level of basketball I️ just want to use my IQ and help guide my young team in the right direction

Q: How did you prepare in the offseason for the upcoming season?

A: Every offseason I️ work at something that I️ wasn’t as good at in the past season I️ check my numbers and stats to see what it is I️ need to get better at and that’s what I️ work on most.

Q: Are you ready for the season?

A: Most definitely, being that I️ sat out last year as a redshirt I️ studied the game more learned more about it and just worked on my craft for an entire year I’ve gotten stronger and wiser.

Q: What do you usually listen to before games?

A: I️ usually listen to trap music during the day and as it gets closer to game time I️ listen to slow music to put my mind at ease because it helps me keep my composure and focus.

A: Game time rituals are always me praying before my name is called in the starting lineups and making sure that I️ send a Prayer up for my brother that is locked up in prison

Q: How far can this team go in the MEAC?

A: I️ believe this team can win the MEAC championship and make it to the NCAA tournament that’s our goal that’s what we are working for everyday