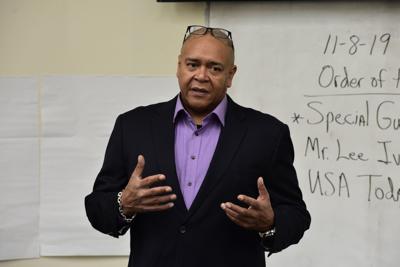 Ivory spoke freely of his experiences leading him to working with USA Today during its fledging years as a young man fresh out of Alabama, relating to students just how out of his league he originally felt.

“I read a dictionary and a thesaurus all the way to DC. I got there and you can imagine having never been on an airplane, coming into the nation’s capital, my eyes are this big, you know? We flew over the Capitol, the Pentagon, and they had a condo waiting for me behind the Kennedy Center. But once I went to work, oh my god was I intimidated. It was the best of Gannett,” said Ivory.

He said he felt scared since he didn’t consider himself to be the best of the best like everyone else. Ivory encouraged students not allow their fear to overtake their dreams.

“I found out I was just as good as them. We had the same training, so I fell back on my training. I could write, they could write. I could edit, they could edit. They had more experience than me, but I had fresh eyes too. You know, I saw some things they didn’t see, and they saw some things I didn’t see. They taught me, and I saw open to listening and understanding,” said Ivory.

Ivory encouraged students to seek out the jobs that they might not necessarily want to do in order to be trusted with the jobs they truly dreamed of, recounting how he managed to get his first big television break through a surprise nationally broadcasted interview with C-SPAN in the Associated Press office where he was working to cover an election night.

“When I think about the world, about strong experiences and honest, fair journalism, all this crap about fake news…there is no such thing as fake news in the mainstream press. Now there are bloggers who are unqualified, nuts that write stuff on the internet and put it out there—that’s fake news. But the New York Times, the Wall Street Journal, USA Today, the L.A. Times, the Chicago Times, the Miami Herald…they don’t write fake news. It’s impossible for them to write fake news,” said Ivory.

He explained that the vetting process of articles in today’s mainstream news sources is so heavy, often involving between twelve to fifteen people, that it’s impossible to produce what the Trump administration has called “fake news”.

“Do you get stuff wrong sometimes? Yeah. Even your source will give you wrong stuff sometimes or you’ll write something down wrong  sometimes, but it’s corrected very quickly. Don’t believe this fake news narrative. That’s number one on the first page of the dictator’s handbook—discredit the press,” said Ivory.

Addressing a student’s inquiry about how to get experience in order to accomplish one’s dreams, Ivory said that employers want to know if you’re dependable, independent, and if you ask questions to keep the learning process engaged in your mind.

Professor Johnson added that a great place to get experience was working with the student media sources while in college.

Another student asked for advice about how to be confident in high-stakes news coverage situations even though you may be a student journalist to which Ivory responded, “Try to find a competitive edge. I really hate that when that happens because it does make you feel small and insignificant, but know that it’s just growing pains and you’re going to be fine because you’re smart and it won’t happen again.”

“Without NABJ, I can say safely that I may not have done as well. There’s something about being around three and four thousand people who look like you, think like you, have similar experiences, etc. and just sit and talk about ‘What did you do when you knocked on doors and they wouldn’t let you in because you didn’t sound black on the phone?’ and ‘What did you do when you were covering American Idol and they made you feel small?’ That’s what NABJ is about,” said Ivory.

He also strongly advised students to attend the next upcoming NABJ conference in Washington, D.C. next year, saying that they would be welcome since the focus of the organization is on young black journalists and their growth and development in the journalism industry.

“Everyone from Spike Lee to Jay-Z to whoever is NABJ. You’ve gotta come to NABJ,” said Ivory.

Regarding another question about his White House coverage days, Ivory said it wasn’t something he expected in his career but something he highly valued by way of experience.

“I was really energized by it and I learned so much. Talk about feeling small and insignificant, I was surrounded by all these people who’d been covering Congress for fifteen, twenty years and they knew everything. There’s so much minutia and so many things you’ve gotta know about covering Capitol Hill,” said Ivory.

Ivory told students he was shy growing up, but overtime learned how to balance fear and confidence quickly in his career as well as learned to develop an edge over other journalists by doing diligent research before interviewing his sources.

He also went into detail about his experiences working in the early days at USA Today under the direction of Al Neuharth.

“We had our growing pains just like any other growing publication, but it was so much fun. It was like being in college with money, hanging out with your best friends and being put up in these condos, getting paid, working for USA Today—the best in the company, and we were doing crazy fun things all day. We worked like dogs, fourteen and sixteen hours a day, but we were forged like steel, coming through the fire together,” said Ivory.

Ivory concluded his talk with a few final words of advice.

“Shreeveport was more a training ground than anything else. Even though I was the only black reporter on staff, I got all the racist stuff. It was cool, I grew up in the south so I was like, ‘Ok, your mama’ so I wasn’t really that bothered by that but USA Today is what really freaked me about, because this was supposed to be the best of the best. It was my first time on an airplane. I was scared scared. Once I got in there and realized, they’re humans just like me,” said Ivory. “All the athletes, all the big speakers will tell you, it’s okay to keep a little edge. It’s okay to be scared just a little bit to keep you on your game.”

For those interested in engaging in the Savannah State University chapter of NABJ and the Tiger’s Roar broadcast program, please contact Professor William Martin at 912.358.3353 or martinw@savannahstate.edu.

For those interested in getting involved with Tiger’s Roar, the independent student voice of Savannah State University, please contact assistant Professor Jessica Sparks at 912.358.4093 or sparksj@savannahstate.edu.