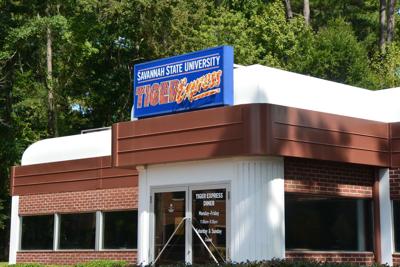 The Tiger Express dining facility at Savannah State University has been closed since the beginning of the school year, and students are upset.

In a September interview, Joe Davis, director of Dining Services at Savannah State, said Tiger Express wasn’t permanently closed. The problem is a broken air conditioner and funding to fix it, he said.

Students, especially those who live in the University Village, are upset the facility has been closed.

“I really just miss the food variety,” sophomore mass communications major Kamia Caldwell said. “They had the most variety on campus. I know some people say the ‘Cafe’ does, but it really doesn’t because you can’t take any of it out. And this is a diner-type deal with outdoor seating and you have inside seating, as well. It’s limited but you have to-go containers that you can take.”

In the 2018-19 school year, there were three dining facilities open on campus including the Student Union, the King-Frazier Student Center Dining Hall, and Tiger Express. Within those facilities, the Student Union contains several vendors such as Starbucks and Austin Grill.

Since August, Tiger Express has been closed, and there are fewer vendors in the Student Union, limiting the number of options students have for food on campus.

Jordan Peterman, senior pre-law major, said a lot of students were looking forward to having Tiger Express as an option this school year.

“It was the only place on campus to have the option of milkshakes,” he said. “Of course, that was a great incentive to go there.”

Davis was unavailable for comment about timelines to fix the air conditioner at Tiger Express.

Students must not be upset because they services of Tiger Express are not permanently closed. I found this directory regarding games of chance. They just took break for the refurbishment of the restaurant.