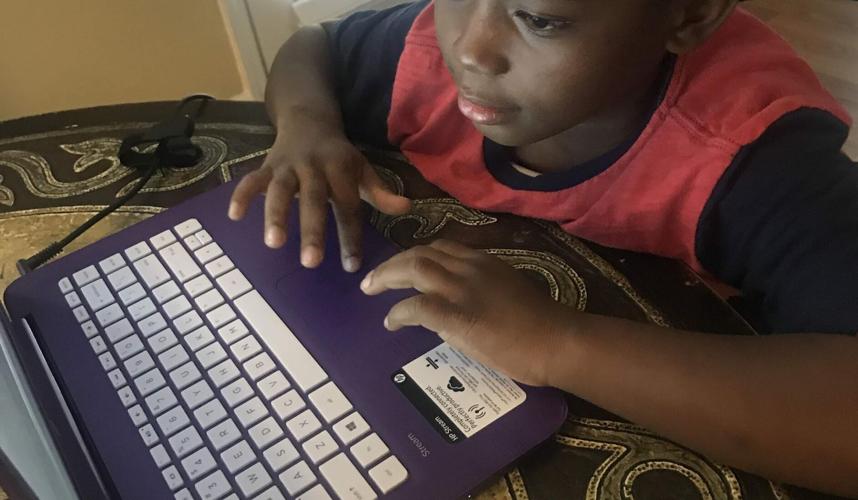 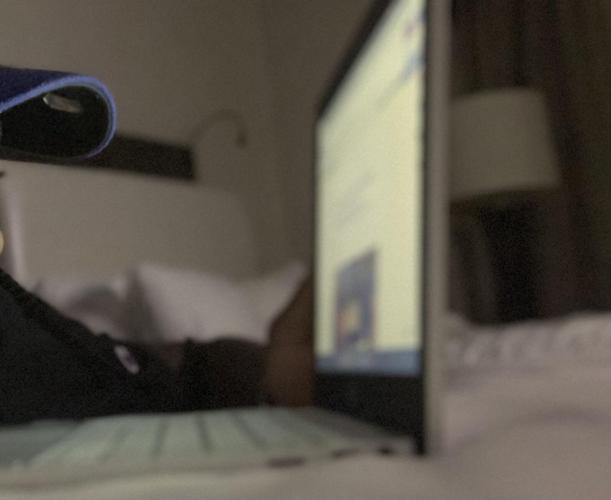 A student using their laptop late at night. 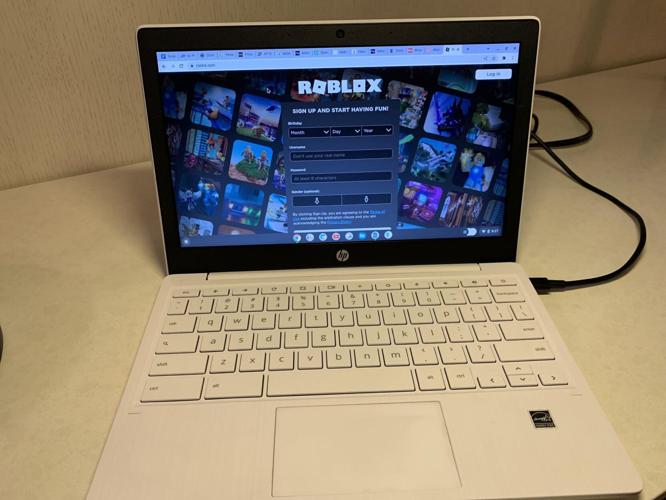 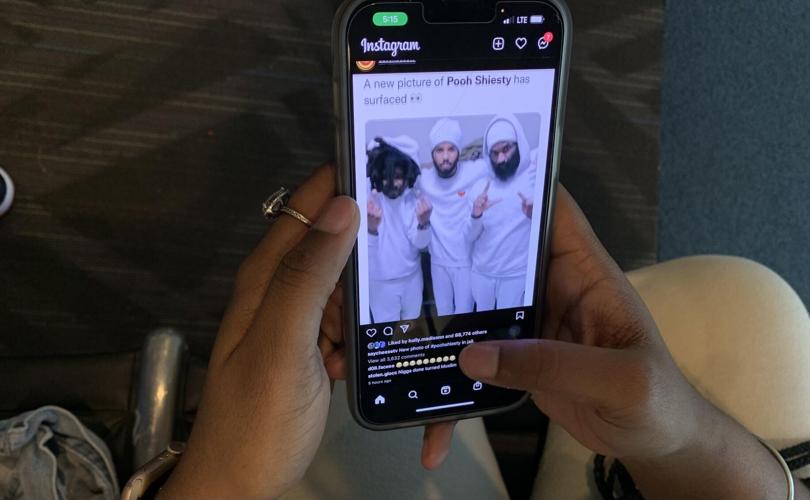 Since the start of the pandemic, the way we approach life has changed. Society witnessed schools closing, businesses shutting down and leaving everyone having to do everything from home.

This shift caused the world to quickly adapt and rely on technology and screens to do almost everything for them. With so many major tasks being done virtually and online — like work and school — screen time and media consumption has skyrocketed. This increase has especially been seen in children’s screen time and is starting to take a rather negative turn on them.

Before 2020, the increasing time among children’s screen time began to become alarming and the massive surge of online activity in the Spring of 2020 added to the creation of unhealthy digital habits like extreme levels of screen time.

According to Qustodio, a company that tracks usage on tens of thousands of devices used by children, screen time has doubled since 2020 in the ages of children 4 to 15, worldwide.

Fortunately, Covid-19 did not have the same damaging effects it had on adults in children, but some of the secondary effects of the pandemic and it’s digitizing of our everyday lives could be just as harmful and last even longer for children.

Dr. Adria Wilkes, a Savannah pediatrician who currently serves as the Chair of the Pediatrics Department at Memorial Health University Medical Center said that she has seen the increase in screen time jump tremendously since 2020.

“Over the past five to ten years in general we have seen a significant increase in children’s access to electronic devices of all forms… whether it be computers, phones, tablets and game devices… now of course add COVID to that, it has been even more pronounced”, said Dr. Wilkes.

It is no surprise that kids are spending most of their time in front of a screen. During the peak of the COVID-19 virus, everything from education to play, socialization and even exercise were forced online. As many parents desperately juggled work and childcare, the internet became the family babysitter. Children were literally trapped behind screens.

Tamari Sheppard, sister of two children under the age of 11 saw her once active and engaged siblings turn to their devices as an alternative. “...[my siblings] were more active pre-pandemic,” she said.

During the many months of lockdown and the closings of school everywhere, parents — like Shephard’s mom — overlooked the vastly increasing time their children spent on video games, television and cell phones.

“Due to the pandemic my mom has been working longer hours and it's honestly easier for her to supervise them on the tablet… versus supervising them outside'', said Shepard.

Socializing is a big part of growing up, but the pandemic brought that to a halt. When classrooms shut down and school became virtual, children were forced to find new and alternative ways to be social and stay entertained.

Most children and teens now spend 75 percent of their waking lives with their eyes fixed on a screen, according to a recent study performed by the International Center for Media & the Public Agenda (ICMPA). The study also found that students who unplugged their electronic devices for one 24-hour period felt extremely lonely and didn’t know how to fill their time.

Kids have become more dependent on screens for fun now than ever before. Sherrell Bright described how her two children, under the age of 11, use their devices for hours and hours at a time and barely leave their rooms and interact with each other or her. She described their connection to their devices as nearly addicting.

Bright says the pandemic has definitely shifted the way her kids socialize. Bright expressed that her kids rely on their devices for entertainment.

“...Because they’re stuck in the house not being able to play and interact with other children… all they want to do is play video games or watch TV or be on their phones” , said Bright.

Dr. Wilkes also opened up about her son’s experience with his electronic devices. “My son has a Nintendo Switch,” said Wilkes, “left to his own devices, he would probably spend 5 hours on that. Kids get into their own world and they have no track of time… that's how addicting they are.”

The increase in screen time in kids is evident through data and research but how exactly is this affecting children?

Research conducted by Quostodia already shows that greater use of digital devices if internet use is unsupervised heightens kids’ risk of sexual exploitation and cyberbullying. Studies on excessive screen time from before COVID also pointed to mental health issues and poor psychological well-being including anxiety and depression, as well as physical health issues like vision fatigue and obesity.

She then added, “…I have absolutely seen middle schoolers [and] some late elementary age kids who have had significant anxiety, panic attacks, and depression come about.”

Jason Nagata, MD, lead author on the JAMA Pediatrics study and UCSF assistant professor of Pediatrics also discussed some of his own medical observations.

“As screen time increased, so did adolescents’ worry and stress, while their coping abilities declined,” Nagata said.

“Though social media and video chat can foster social connection and support, we found that most of the adolescents’ screen use during the pandemic didn’t serve this purpose”, said Nagata.

“Screen time lends itself to more sedentary time and less physical activity, snacking while distracted, eating in the absence of hunger and greater exposure to food advertising”, said Nagata.

With more apps like TikTok, Facebook and YouTube increasing in popularity, and online multiplayer games like Fortnite, Among Us and Roblox, kids have a higher risk of being exposed to content that is not appropriate for their age, especially if they are not being supervised.

Dr. Wilkes discussed how one of her former kid patients was tricked online by a predator she thought was a kid.

“I had an 11-year-old girl… she was doing some type of multiplayer online game… and she was talking in chat rooms to people who she thought were kids about the game. She met a friend who said they were an 11 or 12 year-old-boy and they exchanged phone numbers,” said Dr. Wilkes.

The relationship started innocently but as it progressed and continued, pornographic images had been sent, and her parents got law enforcement involved and discovered the guy she was talking to was an older gentlemen from another state.

Doctors advise parents to use parental blocking apps to help filter what their children and teens consume on a daily basis.

Patricia Ratcliffe, retired professional educator said, “Parents have to be intentional about what their kids are doing online.”

It is known and understood that 2020 was a tough year for everyone, the world is changing and technology will always shift with it. Propelled by the pandemic, the excessive use of technology among kids is at its peak and will continue to be if not addressed.

Although technology has its positives, children have embraced this new digital shift to the point that the main life they live is through a screen. However, many kids are oblivious to the dangers of the internet as it relates to their privacy, health and even their future reputations.

The question now is what effect will the excess in screen time have on children’s health, mental stability and ability to learn not only now, but also in the future? It is important that parents are intentional about the time their kids spend on these devices and monitor the contents, have parental controls and have conversations with children about the risks of the internet and being online at such an extreme rate.