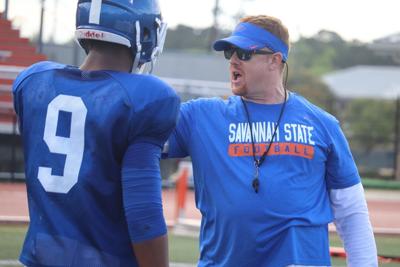 This picture displays the raw emotion and relationship between Head Coach Shawn Quinn and Running Back, Chris Scott captured Apr 5th, 2019 at Savannah State’s 2019 Spring Football Camp kicking off March 28th. The Tigers have dived headfirst into tacking the fundamentals of this beloved sport in order to dominate their entrance into Division II of the SIAC. Savannah State has recently transitioned into the SIAC from their Division 1 position in the MEAC as well as the promotion of Shawn Quinn as Head Coach officially as of February 2019. The transition is a bittersweet one but it’s safe to say that many are looking forward to the new energy and competitive spirit the new competitors will bring to the institution. Amongst the competitors are Clark Atlanta, Tuskegee and Albany State which Savannah State will be playing in the 2019 Homecoming game, an exciting time to look forward to in the upcoming Fall semester for current students, Alumni and locals.

Shawn Quinn was amongst three other men up for the slot of the 26th Head Coach at Savannah State University and replaced Eric Raeburn who initially hired Quinn as a Defensive Coordinator in 2018. It’s safe to say Quinn is looking forward to rebranding State’s reputation and didn’t hesitate to answer questions for the media concerning his intentions with the transition in the Fall. As of February 6th, 2019, Quinn recruited 18 new players for the team on National Signing Day being sure to focus on mainly catering to the players on the rise in the Savannah Area. He finds it important to recruit locally in order to establish a connection between the local area and Savannah State Athletics. The support system from the city would bring in not only a great revenue but boost Tiger Pride, which in the end results is game winning on and off the field. Quinn plans on “taking the fight to the opponent” and wants to focus solely on making sure his boys are not only fit for the game physically but mentally by pressing the importance of having substance in not only Football, but every aspect of life.